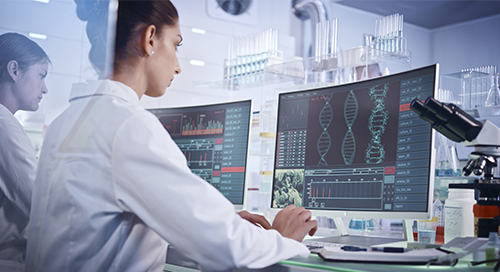 Precision medicine has the potential to revolutionize treatment for previously incurable diseases like cancer and other conditions. One of the most important tools in the field of precision medicine is genetic testing. In recent years, the number of genetic tests has proliferated – with over 75,000 different tests now on the market. By 2025, some experts believe that spending on genetic testing will reach $17.6 billion.

As state Medicaid agencies strive to reduce healthcare costs and grapple with value-based payments, it should come as no surprise that reimbursement for genetic testing is top of mind for many state plans.

Lowering the Total Cost of Care Through Genetic Testing

Rising healthcare costs is a problem that isn’t going away. PWC’s Health Research Institute estimated that in 2020 medical costs would increase 6%. Both precision medicine and value-based care are seen as potential solutions to this challenge.

When considered in isolation, many of the genetic tests that underpin precision medicine are costly. As state Medicaid agencies and other payers shift to value-based or episode-based payment models, however, the expense is often justifiable. For example:

Bridging the Gap Between Genetic Testing and Payment Policies

Despite the promise associated with many genetic tests, state Medicaid agencies still face numerous hurdles when it comes to reimbursing members for these services. For instance, the CPT codes associated with genetic testing number in the hundreds, while thousands of tests are available to patients. In addition, only a limited number of CPT codes have been created for tests that analyze multiple genes. More specificity is needed for genetic tests, since both labs and payers struggle with panel codes.

In addition, state Medicaid agencies rightfully want evidence that genetic tests deliver value for patients. In many cases, more clinical studies are needed to show the utility of genetic tests. In the context of precision medicine and value-based care, financial models need to be created to demonstrate that the upfront costs associated with genetic testing are offset by the lower overall cost of treatment for a patient’s entire episode of care.

Genetic testing, precision medicine, and value-based care are all healthcare trends that are here to stay. To navigate this new landscape, state Medicaid agencies need to utilize a variety of tools and techniques to deliver better patient outcomes while lowering healthcare costs. To learn more about how we can help, feel free to contact us.