The Importance of Maximizing Health Insurance Through the Public Health Crisis 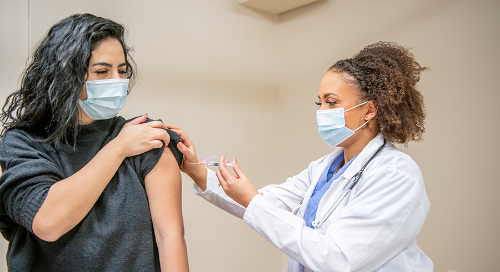 Around March of last year, a friend of a friend — let’s call her Sarah — was due for a yearly checkup. Though Sarah’s doctor wasn’t one of the many that temporarily closed during the height of the pandemic, she postponed the appointment, not wanting to risk a COVID-19 infection or tie up health care resources during a public health emergency.

Fast forward to June 2020, and Sarah became one of the millions of people unemployed and without health insurance during the pandemic. Continuing her employer-sponsored coverage through the Consolidated Omnibus Reconciliation Act (COBRA) wasn’t an option since paying the monthly premium on her previous plan was an insurmountable expense, especially in light of her job loss. Now, nearly a year since missing that initial appointment, Sarah is considering enrolling in Medicaid as she continues her job search so that she, and her family, can catch up on missed care.

Though anecdotal, Sarah’s story is unfortunately not unique. As unemployment soared during the pandemic, so did Medicaid enrollment, with the Kaiser Family Foundation estimating over 6 million new enrollees between February and September 2020. This increasing reliance on the health care safety net comes at a time when its fiscal integrity is most critical. Here in Washington, D.C., a number of policies are being considered that would enable care access for millions of low-income Americans and could cost billions to implement.

Maximizing health insurance has never been more critical than in the current health and economic climate — both in facilitating care access and protecting the public dollars funding that care. Here are three keys to preserving the limited funds available to serve the health care needs of our nation’s most vulnerable populations and what employers can do to help.

For individuals who lose employer-sponsored insurance, COBRA is an option for continuing health coverage within the same provider network. However, in reality, few unemployed workers have the financial means to pay their employer plan premium and administrative fee, with other necessities like food, shelter and transportation often taking precedence.

A proposed federal subsidy promises to eliminate this cost barrier by covering 100% of the plan’s premium. The benefits of this would be myriad. From a public health perspective, expanding COBRA could alleviate gaps in care during the pandemic by allowing patients to maintain relationships with the doctors they know and trust and who understand their health care needs in the context of their medical history. In terms of program integrity, it would shift costs for which Medicaid or Medicare would have otherwise been responsible.

Historically speaking, however, cost is not the only barrier to participation in COBRA. When a partial COBRA subsidy was created as part of the 2009 American Recovery and Reinvestment Act, just 31% of COBRA-eligible workers were aware of the subsidy.

Should fully subsidized COBRA coverage or premium assistance be made available, history shows that consumer outreach and education will be vital to widespread adoption — and that employers, among many other stakeholders, will play a key role in ensuring consumers are aware of this potential lifeline.

Pandemic-scale testing and vaccine distribution is largely new territory — and coordinating benefits for these services, even newer. The speed and scale with which the nation is working to get shots into arms has fueled an all-hands-on-deck effort, with local health departments, pharmacies, health centers and other nontraditional sites serving as testing and vaccination centers.

This new landscape, combined with the diversity of stakeholders involved, has resulted in disparate coordination of benefits processes across federal, state and local jurisdictions, which is placing undue burden on the government dollars allocated to cover these services for uninsured individuals. On behalf of one southern state, for example, our company found that approximately 15% of patients who appeared to be uninsured when getting a COVID-19 test had other primary insurance available. With regard to vaccinations, this trend could quickly reach unsustainable levels as the vaccine supply increases and more Americans become eligible.

We believe that a federally manded post-payment review process for uninsured claims would help to preserve the limited state and federal funds allocated to cover testing and vaccine services for uninsured individuals, and it would do so without inhibiting the principal mission of getting shots into arms. Strengthening and streamlining systems for capturing insurance information should also be a priority for federal agencies both during and after the pandemic.

An analysis from the Urban Institute found that, if the 14 states that did not expand Medicaid under the Affordable Care Act (ACA) had done so in 2020, 4.4 million more people would have been insured last year. With millions of people losing employer-sponsored insurance during the pandemic, expanding access to Medicaid and subsidized coverage through the health insurance exchange is a vital step toward reducing the coverage gap. The Biden administration has already taken several actions to advance this effort, including reopening the health insurance marketplace, increasing premium tax credits for ACA coverage and mandating a review of previously enacted policies to identify any that impede the effectiveness of Medicaid or the ACA.

If there was ever a time to expand Medicaid and make the ACA more affordable, it is during this time of health and economic crisis. In addition to current legislative proposals, implementing a COBRA premium assistance model could help free up funds for Medicaid and ACA premium subsidies by instead enrolling eligible individuals in a private, employer-sponsored plan.

The convergence of vaccine distribution, rigorous testing and substantial economic relief is the most promising path out of this once-in-a-generation crisis. Protecting the integrity of the systems that enable these activities, while making coverage available to all who need it, should remain top priorities as we continue to improve our health care system in the immediate and long term.